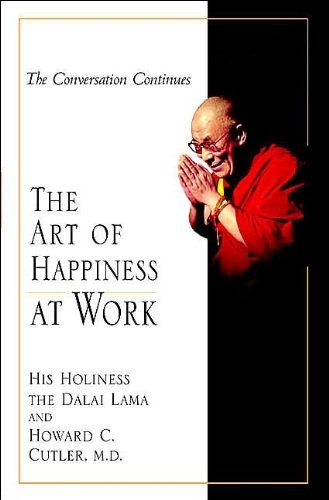 THE ART OF HAPPINESS AT WORK

It should come as no surprise that the Dalai Lama, who is believed by his followers to be the human incarnation of the Buddha of Compassion, would take a compassionate interest in helping Westerners find happiness in the daily grind. Still, this slim follow-up to the 1998 bestseller will be a revelation to those who aren't yet familiar with the thought of the brilliant Buddhist monk. Attitude and a sense of meaning are the keys to happiness at work, the exiled Tibetan leader tells psychiatrist Cutler in the course of conversations that took place over several years. What will surprise many is the prime importance the Dalai Lama places on reason and analysis, and on the need to acquire "a sense of self that is grounded in reality, an undistorted recognition of one's abilities and characteristics."

Cutler presents the findings of various Western researchers, including the concept of "flow," that state of blissful absorption in an activity that allows people to lose track of time and self-identity. The Dalai Lama compares flow to meditative experience, yet downplays it. In order to achieve the kind of happiness that can be sustained even in the hardest times, he says, we must engage in the slow, steady work of training our hearts and minds, rooting out negative habits and cultivating basic human values like kindness and compassion. The Dalai Lama avoids generalization, emphasizing the complexity of individual situations. He won't condemn the manufacture of weapons, for example, because, he says, although they are destructive, "nations do need weapons for security purposes."

At a time when Western spiritual seekers are flocking to books telling them that all they really need to be happy and good is to enter into a blissful meditative communion with the now, it is provocative and moving to be urged to think and to know oneself by the man who is arguably the greatest living symbol of the developed spirit in action. And what may be most moving is this: if the Dalai Lama is right, and if people do as he suggests—if they learn to see themselves impartially and to analyze their work in light of how many people it touches—they will begin to see, whether they are picking oranges or writing a novel, that the highest purpose of work and, indeed, of life is the helping of others.