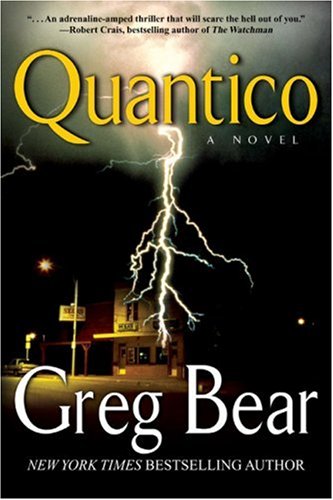 This thought-provoking near-future thriller from bestseller Bear ( ) focuses on two young FBI agents: William Griffin, the son of a legendary FBI lawman, struggles through training; Fouad Al-Husam, who expects suspicion for his heritage and Muslim faith, finds himself instead sent on super-secret missions to the Middle East. Playing a minor supporting role is their Quantico classmate, Jane Rowland. When a quiet man with mismatched eyes starts telling certain fanatics that he can make gene-keyed anthrax to destroy their hereditary enemies, Griffin and Al-Husam form an unlikely team, headed by veteran agent Rebecca Rose, to handle the threat. Bear's near-future science is, as always, eerily plausible, and while he doesn't stint on sharp criticism of political infighting and its potential to hinder antiterrorism efforts, his would-be terrorists become surprisingly sympathetic as the complex details of their true plan are slowly (sometimes too slowly) revealed.