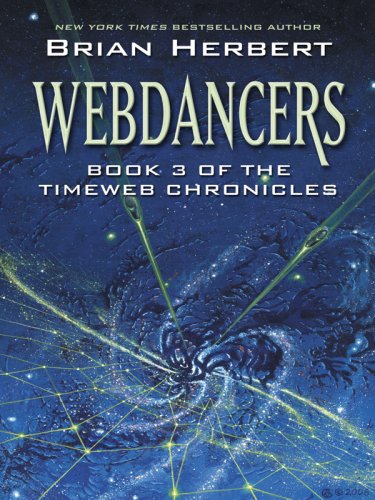 Webdancers: Book 3 of the Timeweb Chronicles

The third Timeweb Chronicles space fantasy episode (after 2007's ) concludes “eco-warrior” Noah Watanabe's personal journey. Watanabe has unprecedented access to the disintegrating Timeweb that spans the universe, but interaction with it begins to change him into something more than human. Meanwhile, the threat of the mysterious Hib-Adu Coalition unites the human Merchant Prince Alliance and the shape-shifters of the Mutati Kingdom in common cause. As the political situation and the Timeweb decay, Watanabe struggles to protect his people from the forces imprisoned within the Web. Only diehard fans will last to the end of the novel, which suffers from clunky writing, a plethora of sketchy characters, a confusing plot, stakes so high as to be meaningless and a pace alternately breathless and leaden.