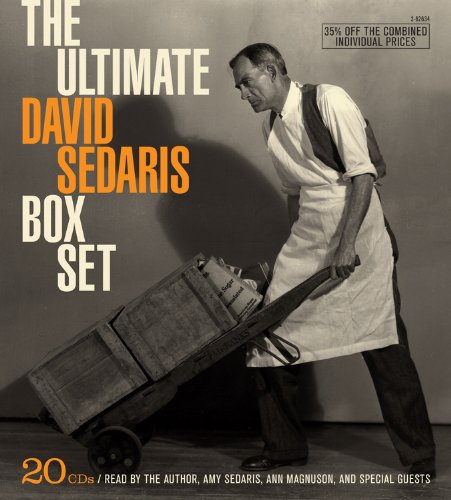 Previously released in 2002 as a 14-CD set containing Sedaris's , , and , this updated 20-CD box set adds his latest two Grammy-nominated audios (his single-disc live concert at Carnegie Hall and the unabridged ). Twenty-two hours of Sedaris in one box should be nirvana to his legion of fans. This collection allows listeners to witness Sedaris's growth as a writer. He never stops being funny but by , his essays exhibit the memoirist more than the humorist, and his ability to walk a razor's edge between hilarity and heartbreak (without bathos) is breathtaking. His essays are written to be read aloud, and he performs them flawlessly. Considering the long gestation of this collection, it's surprising that the interior packaging is so dismal. The discs are housed in blank, black slipcases with no illustrations or track listings (which is especially distressing because , and don't have track listings on their discs and there is no track listing on the outer package).