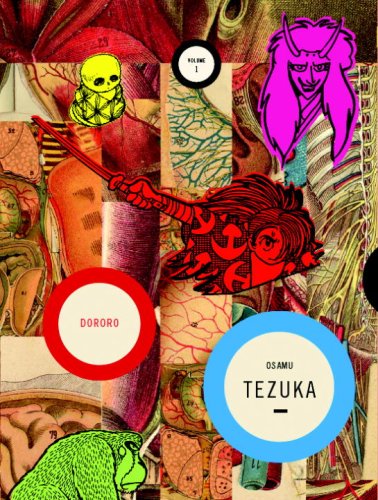 A surprisingly bleak contrast to manga pioneer Tezuka's better known and , this first of three volumes relates the horrific origin of Hyakkimaru, a teenage hero whose father sacrifices his newborn son's bodily components to 48 demons in exchange for unstoppable military power. What remained of the child is found by a doctor who fashions him artificial limbs, including prosthetic arms that house hidden swords, and when Hyakkimaru comes of age, he embarks on a mission to kill the demons, thus reclaiming his flesh-and-blood body parts. Early in his journey, Hyakkimaru encounters Dororo, a young thief, and the two becoming traveling companions. Facing and defeating all manner of inhuman threats, the pair is driven away by the very people they've saved, villagers who are either outraged by Dororo's unashamed thievery or terrified by Hyakkimaru's perceived strangeness. But with each supernatural set-to, Hyakkimaru regains another piece of his stolen humanity and moves on to take down the next demon. Marking Tezuka's move into edgier work, this series is riveting and utterly creepy, with Tezuka's signature “cute” style offering a welcome counterpoint to the visceral horrors depicted.