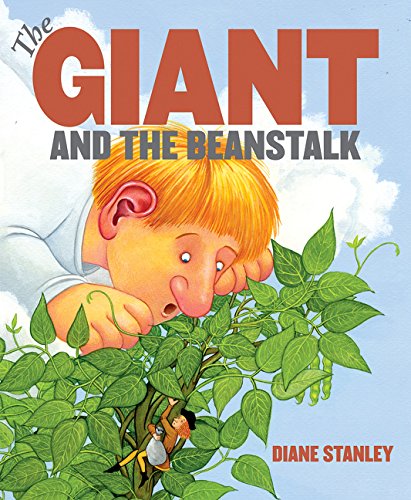 THE GIANT AND THE BEANSTALK

Stanley ( ) once again cleverly contorts a familiar tale, here focusing not on Jack but on the giant from whom he purloins a beloved pet. Otto, a young giant with sharp teeth, beady eyes and claw-like nails, looks quite ferocious. Yet he is "embarrassingly polite" and selects as a pet a sweet hen named Clara—who just happens to lay golden eggs—instead of the fierce critters his parents and peers favor. Stanley thus allows youngsters to sympathize with Otto, who is understandably devastated when Jack appears seemingly out of nowhere, grabs Clara and disappears ("It was the single worst moment in Otto's life"). Otto shouts, "Fee, fi, fo, fum" because it's "the scariest thing he could remember from fourth-grade Threats and Curses." Though he suffers from vertigo, the determined giant discovers the beanstalk and pursues the thief. In a lively sequence, Otto searches a fairytale land of mountains and thatched-roof houses as he encounters, among others, a candlestick-jumping Jack, a Jack who tumbles down a hillside with his sister, Jill, and a lean Mr. Sprat grilling steak and celery. Full-bleed spreads of the nursery characters heighten the humor, and an inset angelic portrait of the giant, clipping his nails and donning a flower crown so as not to scare the townsfolk, will especially tickle youngsters. Not surprisingly, the story leads up to a felicitous finale, but the twists and turns readers takes along the way make this tale as original as Stanley fans have come to expect. Ages 5-8.