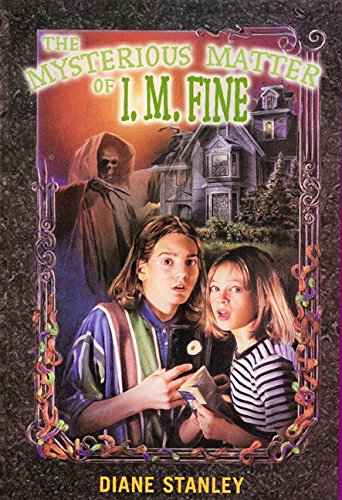 THE MYSTERIOUS MATTER OF I.M. FINE

Stanley reveals yet another dimension of her talents in her second novel (after ), here serving up a witty story that manages to be both light and satisfying. Fifth-grade narrator Franny Sharp, having just entered yet another new school, cements her friendship with the independent Beamer as the two notice how many of the other kids in the cafeteria are playing, riotously and continuously, with Jelly Worm candies. Franny sees the connection between the sudden fad and writer I.M. Fine's latest Chillers book, (in it the Jelly Worms come to life and destroy Cleveland). The next Chillers release, about a microwave that causes excruciating headaches, coincides with the outbreak of a virus characterized by... headaches. As Franny and Beamer investigate, Stanley cheerfully sends up horror series fiction, unfolds a mystery involving orphan twins separated in childhood and repeatedly testifies to the pleasures of reading classics fluff. She creates depth with rich but offhand characterizations of family life (Franny's younger twins are named Zoë and J.D., a fact delivered without jokiness) and by introducing tough subject matter (the painful effects of McCarthyism play a significant role). Superior entertainment, this work should engage both ambitious readers and diehard fans of the genre it satirizes. Ages 9-up.