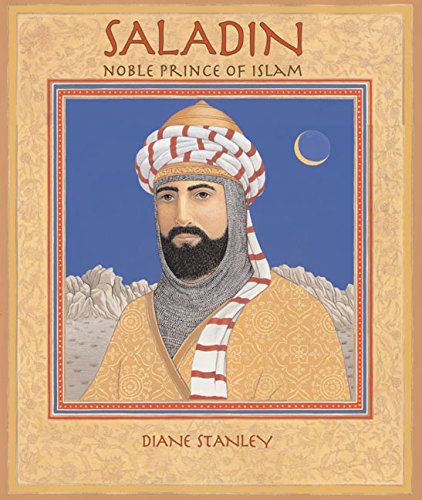 Meeting the high standards set by her previous picture-book biographies, Stanley (; ) here focuses on the 12th-century ruler known as "the Muslim saint-king" who was "praised even by his enemies as 'the marvel of his time' " and crystallizes many of the issues still at the root of conflicts today. Stanley begins with a concise overview of the First Crusade, then hypothesizes about the impact of the Franks' murderous conquest of Jerusalem on the young Saladin, a devout Muslim (after listing Jerusalem's importance to the "three great religions," the boy poses a question: "Couldn't everyone just share it?"). The author outlines religious practices, the political history of the Middle East and of Western Europe, and the vexed military campaigns for Jerusalem, once again demonstrating her trademark ability to research and then distill complex topics in terms accessible to middle-graders. She painstakingly builds readers' sense of Saladin's integrity and skilled leadership. For example, when his army was poised for certain victory over the Christians holding Jerusalem, he wrote to a knight proposing generous conditions for their surrender: "I believe that Jerusalem is the House of God, as you also believe. And I will not willingly lay siege to the House of God or put it to the assault." Stanley's precise, detailed artwork pays homage to period architecture. She evokes the colors of Persian miniatures (and medieval stained glass) as her paintings incorporate the complex patterning associated with Islamic art. Portraits of Saladin at home, sitting in front of gorgeously tiled walls with his family, arrayed in sumptuous robes, are particularly effective in conveying the richness of the subject's world. Readers are certain to be intrigued. Ages 8-12.