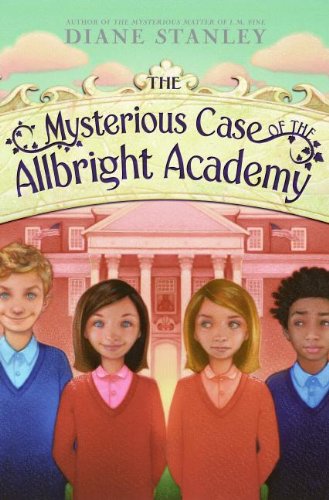 The Mysterious Case of the Allbright Academy

Reassembling the cast of , Stanley delivers another humorous and thoroughly enjoyable mystery, this time set at a too-good-to-be-true school. When Franny Sharp’s younger sister, Zoë, is recruited to attend Allbright Academy, a prestigious boarding school founded by two famous scientists, she refuses to attend unless her twin, J.D., and Franny can come, too. That’s how Franny, who believes herself solidly ordinary, finds herself starting eighth grade surrounded by the best-looking group of overachievers she’s ever seen. Intimidated at first by her award-winning classmates, she quickly bonds with fellow new students Cal (short for Calpurnia) and Brooklyn, and starts to flourish. In fact, Franny’s never felt smarter, looked better or worked harder in her life. But when Cal falls sick and has to leave the campus for a few weeks, she stumbles upon an unsettling discovery. Just what do the ever-present Allbright brownies have to do with making Allbright students so painfully perfect in every way? With sympathetic Franny as narrator and a time-tested premise, Stanley hooks readers from the start, and she keeps them going with characters whose names hint at their true natures (besides the Salinger-inspired Sharp kids, the players include Martha Evergood, Prescott Bottomy and Dr. Horace Gallow). And although some answers to the mystery are obvious early on, the conclusion does not disappoint. Ages 8-12.