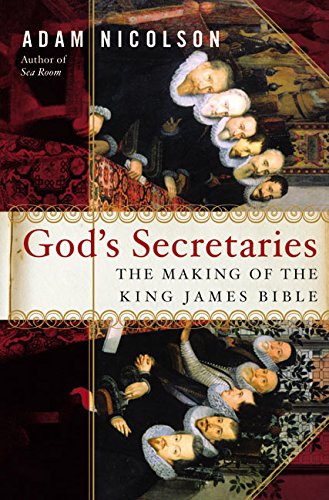 GOD'S SECRETARIES: The Making of the King James Bible

The King James Bible remains the most influential Bible translation of all time. Its elegant style and the exalted cadences of its poetry and prose echo forcefully in Shakespeare, Milton, T.S. Eliot and Reynolds Price. As travel writer Nicolson points out, however, the path to the completion of the translation wasn't smooth. When James took the throne in England in early 1603, he inherited a country embroiled in theological controversy. Relishing a good theological debate, the king appointed himself as a mediator between the Anglicans and the reformist Puritans, siding in the end with the Anglican Church as the party that posed the least political threat to his authority. As a result of these debates, James agreed to commission a new translation of the Bible as an olive branch to the Puritans. Between 1604 and 1611, various committees engaged in making a new translation that attended more to the original Greek and Hebrew than had earlier versions. Nicolson deftly chronicles the personalities involved, and breezily narrates the political and religious struggles of the early 17th century. Yet, the circumstances surrounding this translation are already well known from two earlier books—Benson Bobrick's and Alister McGrath's —and this treatment adds little that is new. Although Nicolson succeeds at providing insight into the diverse personalities involved in making the King James Bible, Bobrick's remains the most elegant and comprehensive treatment of the process.