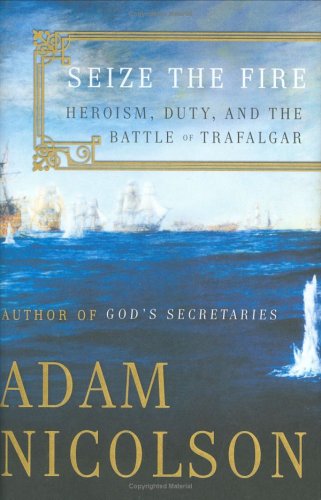 Seize the Fire: Heroism, Duty, and the Battle of Trafalgar

Not widely known as a naval historian, Nicholson ( ) is a highly proficient and readable one. This intelligent and intriguing study of Nelson's naval leadership, though, is definitely for the advanced student of that era, requiring some knowledge of not only the larger culture of Great Britain (as leadership opened to nonaristocrats like Nelson) but also the peculiar culture of the British navy. The latter, the author argues, arose partly from the continuity of leadership, partly from the community of seafarers and partly from the figure of Nelson (1758–1805) himself. Nicholson ranks Nelson very highly among military leaders, with a combination of technical skill, charisma and warmth in his treatment of subordinates that gave him an exceptional hold over his fleet —and made him the British image of the hero for more than a century after Trafalgar. This book ranks higher as a study of cultural concepts than it does as one of events, with the personalities lying somewhere in the middle. Students of maritime history, however, will enjoy all aspects of it as Trafalgar's October 21 bicentennial approaches. .