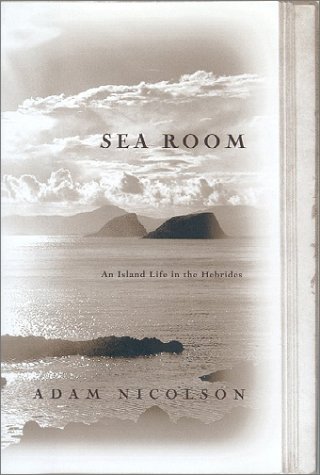 SEA ROOM: An Island Life in the Hebrides

For his 21st birthday, Nicolson's father gave him some islands among the Scottish Outer Hebrides, 600 acres worth of land that the elder Nicolson had purchased on a whim in 1937. At various times, the Sussex-based writer recalls, the Shiant islands "have been the most important thing in my life," and he has produced a vivid, meticulously researched paean to his "heartland," examining its geology, its flora and fauna, and its history as he reminisces about his own idylls there. The islands, now uninhabited except by the Nicolsons, are outcroppings of grass and rock and stark black cliffs, surrounded by churning waters that are notoriously difficult to negotiate. Until 1901, they were continuously inhabited for thousands of years—by an eighth-century hermit, medieval farmers, Irish Jacobite rebels and others documented by Nicolson. The islands are also an important breeding station for birds, and Nicolson observes the comings and goings of geese, puffins and razorbills. Throughout the book, Nicolson explores the troubling idea of ownership; Hebrideans view English landowners with a mix of resentment and derision, and Nicolson acknowledges that his rights to the islands, like those of previous landlords, are morally ambiguous. His mix of scholarship, reflection and lyrical description brings his beloved atolls to life, and the genre-bending book should win some fans among those interested in nature writing and memoir.