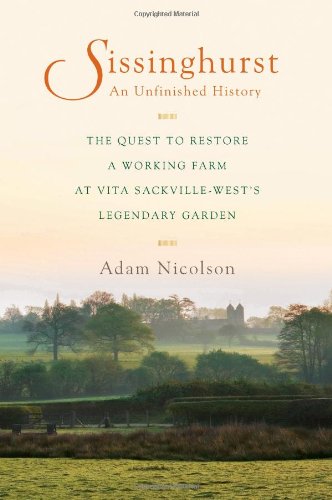 Sissinghurst, an Unfinished History: The Quest to Restore a Working Farm at Vita Sackville-West's Legendary Garden

Nicolson, grandson of poet Vita Sackville-West and diplomat Harold Nicolson—best known, perhaps for being Virginia Woolf's lover—grew up in the 1960s at Sissinghurst, the ruined castle where Sackville-West created her renowned gardens in the 1930s. The author's father Nigel gave the estate to the National Trust in 1967, and when Nicholson came back to live there after his father, Nigel, died in 2004, he embarked on a campaign to “revive a landscape that had forgotten its past.” It's through this lens of love for its past and passion for its future that Nicholson relates the story of his quest, embedding it in a history of Sissinghurst, beginning in its origins in clay, forest, and pastures and the “custom of Kent”—a unique culture of self-reliant men and women who depended on the land rather than on a lord—following through its transformation into a prison for French prisoners of war in the 18th century and its 20th-century revitalization by Vita and Harold. Nicholson's love of language is equal to his love of the land, and his poetic prose evokes the richness of the landscape he strives to save.