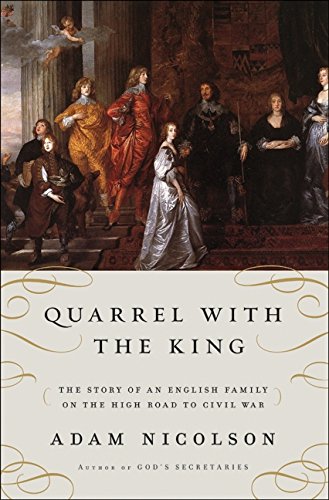 Quarrel with the King: The Story of an English Family on the High Road to Civil War

In his typically supple and elegant prose, Nicolson—author of the acclaimed —traces the Pembroke family’s “arc of ambition, success, failure, and collapse” between the 1520s and the 1640s, when the fourth earl of Pembroke joined the Puritan rebellion. Along the way, Nicolson highlights the ambiguous nature of this most powerful of dynasties—“one of the richest and most glamorous” of their time. Outwardly the servile courtiers of the king in London, in fact they presented a potent provincial counterweight to the monarchy’s centralizing preferences with their vast Anglo-Welsh palatinate and a legion of loyal tenants. While fiercely protective of their rights, the Pembrokes were not “liberal” by today’s standards; if anything, it was the royal administration that represented the future modern state while the Pembrokes and their feudal values harked back to the Middle Ages. As Nicolson wistfully concedes, “this story is about the end of an old world, not the making of a new one.” For fans of the Tudor and Stuart era, this will be a welcome treat. 16 pages of color photos.