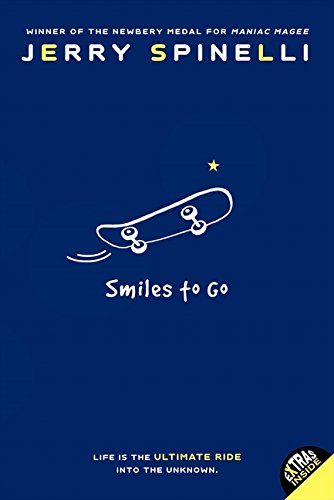 Like the work of Sid Fleischman and the late Paula Danziger, a Jerry Spinelli novel makes me wish I could carry a Spinelli voice around in my head for the truly awful moments of my life: a trip to the emergency room or a run-in with a rabid police officer. Spinelli's voice is artful, amusing and, above all else, reassuring. There's no doubt Spinelli is a consummate pro. The first page confirms this with spot-on character description: “He always had a jawbreaker in his mouth, and when he wasn't clacking it against his teeth he kept up a constant mutter about everything he did, as if he were a play-by-play announcer describing a game.”

The protagonist is the obsessive plan-making, star-gazing, chess-playing ninth-grader Will Tuppence, who has worked out a 12-point plan for himself clear through to the afterlife. Will is solidly characterized through voice, as in the epitaph he imagines on his tombstone—“Here lies Will Tuppence. He Could Wait”—and his wonderful descriptions of his own experience: “The storm inside me had passed. Just dry husks of thought left on the ground.” Even so, it's the girls who really shine in this loosely contemporary novel. Like Stargirl in Spinelli's winning novel of the same name, Will's love interest Mi-Su is completely and totally original, and Will's palpable longing for her is altogether real: “It came to me during biology lab today. She was at another table, leaning over her fetal pig, and I couldn't stop staring at her.” Mi-Su's baffling reactions to Will and to his best friend, BT, form the heart of this story, engaging the reader with a surprisingly fresh perspective on young love.

Comic relief is provided by Tabby, Will's five-year-old sister, and her persistent but unrequited suitor, the five-year-old, orange-plastic-fish-mobile-riding Korbet Finn. One of the funniest scenes in the book occurs when Will consults Korbet on questions of love and the pursuit of one's romantic interest. The climax pulls Tabby into the fray and, perhaps a little too conveniently, resolves the love triangle among Will and BT and Mi-Su. Still, what makes a Spinelli novel isn't plotting so much as character, dialogue, voice and humor. The Spinelli touch remains true in this funny and thoroughly enjoyable read.