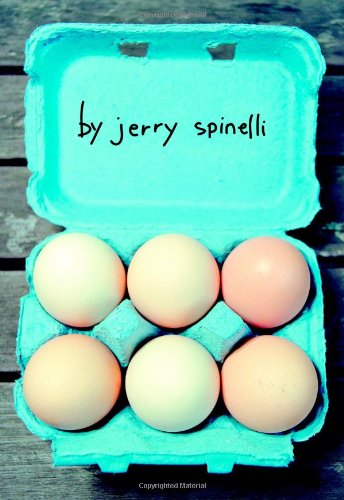 In Spinelli's ( ) latest novel, the Newbery Medalist falls slightly short of the high standard he's set in some of his previous books. The conceptually appealing story starts out with a bang as readers are introduced to David, a vulnerable nine-year-old boy whose mother died by slipping on wet pavement and falling down the stairs. He lives with his grandmother, whom he finds nagging and annoying, and his absent father, who is only around on weekends. One day while begrudgingly participating in a neighborhood Easter egg hunt with his grandmother, David stumbles upon 13-year-old Primrose under a pile of leaves—she is pretending to be dead. Coincidentally, her father is out of the picture as well, and she lives alone with her kooky, fortune-telling mother. David and Primrose become fast friends, sneaking out at night and generally ignoring their guardians. Whatever potential this “kids against the world” setup has quickly dissipates, unfortunately. The two befriend a crafty mechanic down the street named Refrigerator John, call each other names and run away from home a few times, but they don't do much else. While readers will likely get a kick out of David and Primrose's quirky behavior, they might also want to move beyond the kids' bickering into deeper, meatier territory, such as death, fear and healing—issues that clearly affect them both. While Spinelli does touch on these themes throughout, the attention given them seems only to scratch the surface. Ages 8-12.