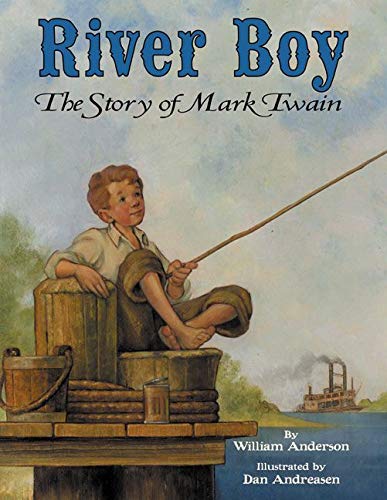 Anderson and Andreasen (previously paired for ) spotlight Samuel Clemens, aka Mark Twain, in this attractive but ultimately disappointing picture book. The author describes Sam's boyhood, spent along the banks of the Mississippi River, through his stints as a printer and steamboat pilot, gold miner and newspaper reporter to his successful career as a novelist and lecturer. However, he presumes a prior acquaintance with Twain's work. For example, he reports that young Sam was punished once by being made to whitewash a fence but tricked his friends into doing the work; yet Anderson never spells out the connection with . The prose slips occasionally into cliché ("The hiss of the steam and the call of the whistle on the Mississippi River tugged at Sam's heart"). Twain's witticisms are quoted only once or twice, and his voice stays muted. Andreasen's paintings help transcend the shortcomings of the text. He conjures a Rockwellian era of barefoot boys in straw hats and suspenders, and evokes the romance of the Mississippi in evocative endpapers that show a steamboat chugging up an inky blue river. Ages 7-10.