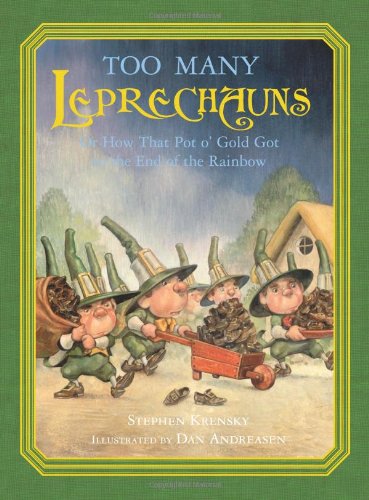 Those who have wondered how the folklore about leprechauns stashing their treasure at rainbow's end came to be, now have a playful explanation courtesy of Krensky's original tale (with the fitting subtitle, "Or How That Pot o'Gold Got to the End of the Rainbow"). Following a year of fun in Dublin, Finn O'Finnegan, who "looked like a rogue and walked like a rascal," plans to recharge by loafing around his mother's cottage in Dingle. But his plan hits a snag when Finn learns that cobbler leprechauns have been keeping the whole town up at night with all their "infernal tapping," as they craft footwear for the local fairies. Finn, sounding like a judge from , insults the leprechauns' style and craftsmanship, inciting their anger and teaching them a trick or two about the transport of fairy gold. Though Krensky's ( ) magical logic may at times be difficult for younger readers to follow, kids will likely be amused by the proud and cranky leprechauns and trickster Finn. Andreasen's ( ) oil paintings exude loads of Old World–Emerald-Isle charm in scenes of rolling hills dotted with stone walls and thatch-roof cottages. His leprechauns, clad in natty green hats and suits, and shod with (well made, no doubt) buckle shoes, prove a memorable clan. Ages 4-6.