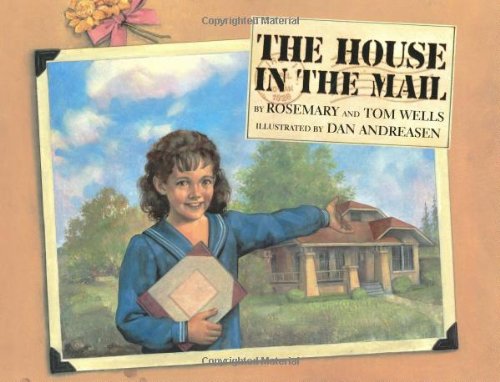 THE HOUSE IN THE MAIL

Rosemary Wells and her late husband, an architect, charmingly detail the construction of a house built from a kit ordered from the Sears, Roebuck catalogue in 1928. Narrated by 12-year-old Emily and arranged to resemble a scrapbook, the volume exuberantly begins: "Hello, whoever you are out there in the world of the future!" Convincing if staid facsimiles of snapshots, advertisements, blueprints, objects in the new house and holiday mementos bolster the period particulars in the story, which speaks also to the strong bond among the members of Emily's family. Anecdotes and snatches of conversation flesh out the era. For example, when her younger brother wishes aloud that their parents had used the house money to buy a Ford truck instead, Emily points out the modern conveniences: "An electric refrigerator. No more drip pan for you to empty from under the icebox. And Ma won't make you carry twenty buckets of hot water for the laundry, because we're getting a new washing machine." From the selection of "the Lincoln" (a six-room "bungalow" selling for $2,500) to the hanging of 22 doors on brass hinges, Emily chronicles each step of the house-raising. Andreasen's (illustrator of Wells's ) art adheres to the scrapbook premise, sacrificing a more dynamic rhythm and palette to offer neatly compiled images in muted colors; the visual treatment is both faithful and skillful. Ages 6-10.