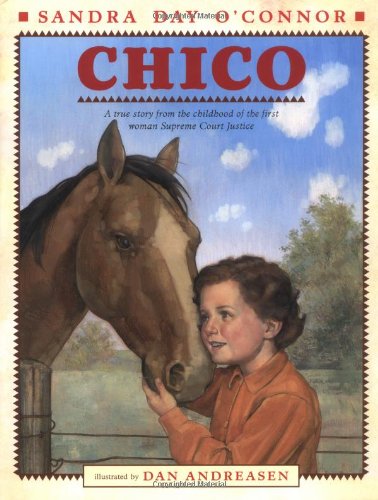 Chico: A True Story from the Childhood of the First Woman Supreme Court Justice

After co-authoring a book for adults with her brother about growing up on a cattle ranch ( , the first woman Supreme Court justice ventures into the children's book arena with a similarly themed tale—just as she's about to depart the court. O'Connor initially sets the scene of her childhood home in the desert southwest: "Sandra liked to explore the ranch and to look for rabbits, antelope, skunks, badgers, birds, and turtles. But she knew she should stay away from the sharp thorns on the cactus, and from scorpions and coyotes." One day, she rides her beloved horse, Chico, to see a newborn calf in a distant pasture. As the six-year-old rides off alone, references to rattlesnakes create a slight sense of foreboding; that inevitable encounter and a later thunderstorm provide some drama to the "day-in-the-life" narrative. The length of the text may make this better suited to more fluent readers, while the age of the heroine might appeal more to a younger audience. Still, O'Connor's tale will likely interest youngsters, with its portrayal of a life on the range so different from most children's experiences. Andreasen's ( ) realistic paintings bring the ranch to life, with background details such as barbed wire fences, flowering yuccas and hawks overhead. The palette changes with the coming storm, the dusty browns and sage greens set against a sky that ranges from pale blue to turquoise. Ages 5-up.