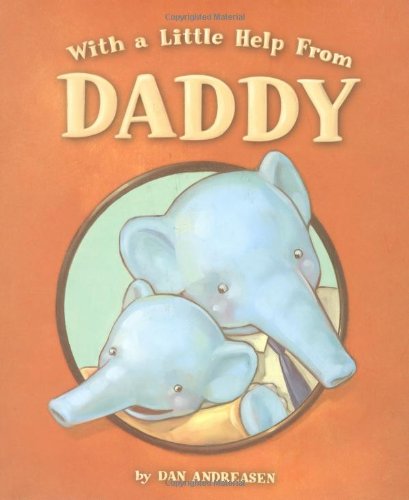 WITH A LITTLE HELP FROM DADDY

In a departure from his detailed, realistic style, Andreasen () here uses thick brushwork and sepia-toned outlines to create a winning chubby blue elephant, the picture of preschool bravura. "Look at me! I'm the tallest boy on my block!" he announces, throwing back his head as he sits atop Daddy's shoulders. The sun, with a bulbous red nose, smiles down on the pair; thick black type underscores the boy's exuberance. A few pages later, a less happy fellow holds hands with his father as he awaits his fate in a spare and forbidding dentist's office. "Sometimes I'm the bravest boy on my block," he says. The text does not acknowledge Daddy's ever-present role in these matters until the final page. But Andreasen's oil paintings make it clear that this is a real team; portraits composed of heavily applied sky-blue brushstrokes, highlighted with mauve and judicious daubs of white, seal the likeness between father and son, and lend the two a sense of movement. Deep brown and russet tones in the duo's surroundings convey a lovely, old-fashioned mood, while large, rounded shapes (a rubber ducky, a ball, a gumball machine) radiate reassurance. Daddy comes across as a thoroughly adult figure, calm but game. Younger children just beginning to try some things on their own will see a reflection of themselves in the little elephant—his big blue nose notwithstanding. Ages .