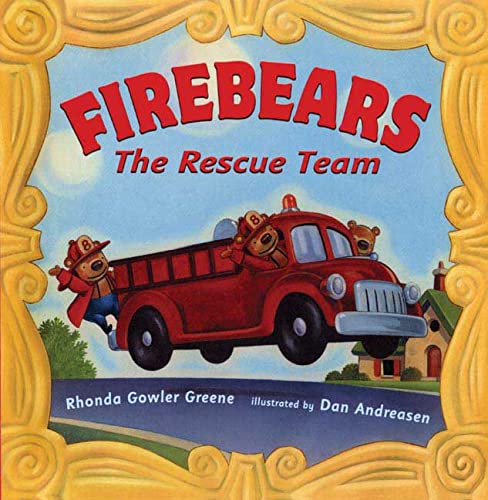 Firebears/ Work and wait/ At Fire Station Number Eight," home to quite possibly the world's cutest public servants. Life as a Firebear has its slow moments; when readers first meet the carmel-colored heroes, they're doing chores around the firehouse or snoozing alongside their pet Dalmatians. But as soon as the call comes, the ursine protagonists head down the pole (the book's orientation momentarily turns vertical) and out into the streets. Gowler's ( ) concise rhymes bristle with just enough declarative urgency for the preschool set: "Firebears/ Speed through town,/ Siren wailing up and down./ Racing, rushing/ To the scene—/ Firebears, the rescue team!" By book's end, the Firebears have rescued not only the obligatory stranded cat ("Happy kisses, scratchy tongue"), but also extinguished a blazing store and saved the lives of a trapped mother and baby. Although Andreasen works in his customary soft, chunky shapes (it's hard not to be reminded of marshmallows), he nonetheless infuses the firefighting scenes with high drama. The Firebears' truck literally sails through the air (never mind that hats go flying, too), and the bears always sport admirable expressions of determination, bravery, and civic pride. A child can really snuggle up to these role models. Ages 2-4.