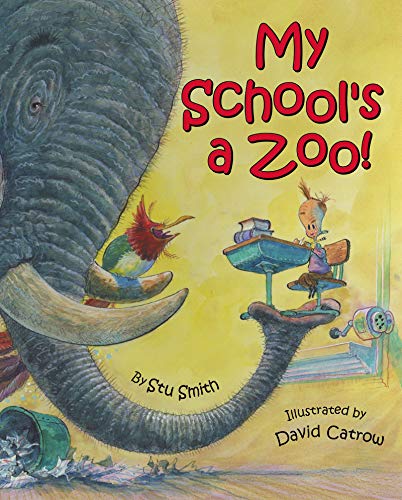 MY SCHOOL'S A ZOO!

In an over-the-top and yet familiar romp, a schoolboy narrator wakes up the day after a field trip to the zoo and becomes convinced that everyone familiar has been replaced with an obnoxious animal. His baby sister, now a furry quadruped, eats his homework; the school nurse, a vampire bat, hangs upside-down in her office (the sign next to her reads "Please give blood today"). "There were starfish on my papers,/ and a beaver cleaned the boards," writes Smith ( ). "The seal clapped two erasers,/ while a fox gave out awards." The boy finally snaps out of his waking nightmare at the end of the school day ("Things seemed back to normal,/ with my sister eating sand"), but wonders how his overactive imagination will cope with the next field trip, to see a "dinosaur display." Catrow ( ) once again puts a giddy spin on common school situations, but his fondness for odd angles, extreme exaggeration and over-the-top detail seems to have gotten the best of him this time: the spreads feel overpacked and unfocused. Still, it's hard to resist another one of the illustrator's weirdly winsome, hyper-expressive protagonists; fans will appreciate his pictures of the boy trying to keep his cool despite vultures in the lunchroom and a computer lab filled with real mice and bugs. Ages 5-8.