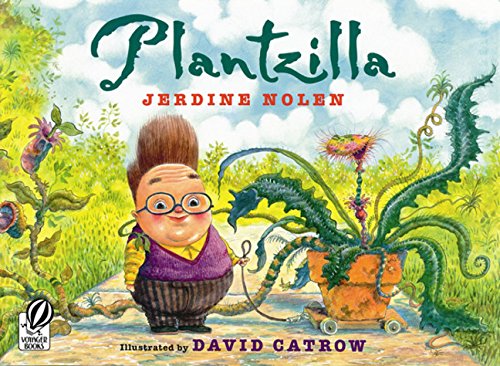 Employing the same tenderness and fanciful sense of wonder that characterized her and , Nolen delivers another picture book with a far-out premise and plenty of heart. A series of letters and postcards tells the tale. Third-grader Mortimer Henryson has successfully petitioned his parents and his science teacher, Mr. Lester, to allow him to bring the class plant, Plantcilia (nicknamed "Plantzilla" by the students), home over summer vacation. But Mortimer's parents worry when Plantzilla starts developing an appetite for meat, growing wildly and moving on its own—and just what has become of Mrs. Henryson's prize-winning Chihuahua? It seems the more care and attention that Mortimer pays his favorite bit of flora, the more human-like Plantzilla becomes. As the transformation continues, the sprawling, blooming plant becomes literally part of the family. The book's distinctive design allows each character his or her (or its) own hand-lettered or typewritten form of expression, a playful touch (although newly independent readers may have trouble with Mrs. Henryson's cursive). Catrow's () exuberant vine of a plant—part Venus's-flytrap, part aloe vera and part whimsy—creeps and curls from spread to spread, like an exotic jungle creature, and all of the humans look eccentric, too. His renderings of Plantzilla's high jinks, such as forming a two-man hockey team to play against Mortimer, compound the nutty fun. Ages 5-8.