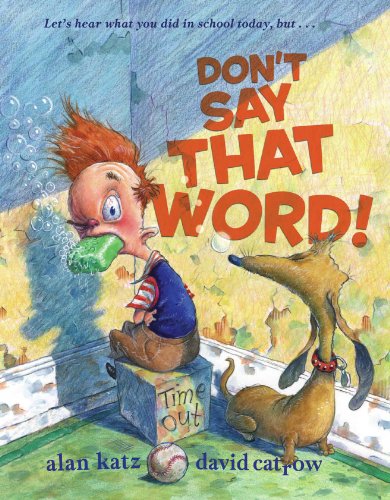 As with Katz and Catrow’s other collaborations ( ), this silly picture book revels in its own outrageous humor. When Michael’s mother asks him what happened at school, he launches into a series of rhymed stanzas that inevitably end in an indelicate word that his mother forbids him from saying. Catrow’s watercolors complement the text with an abundance of humorous details. Michael is portrayed with a knotty shock of red hair as he dramatizes each scene, cluing readers in about each particular word he (and presumably they) are not supposed to say. He holds up a weighty scoop of mashed potatoes to illustrate how his teacher “threatened to punish the group” when “she stepped in a pile of dog...” While Michael and his dog traverse the cluttered, eccentric house, the reader sees only his mother’s hands and shadow, and in addition to the main action, random silliness occurs on each page—the toilet overflows, a squirrel hits Michael on the head with an acorn, a Brussels sprout bounces through the dining room. Finally, when Michael’s mother hopes that he will have “calm days ahead” and suggests that “it’s late and you should be in...” it’s Michael who interrupts, screaming “Don’t say that word!” Readers will be able to supply each missing word with gusto (booger, fart, burp, etc.), though those a tad less daring may choose to keep silent, rather than risk voicing a “bad word.” Ages 3-8.