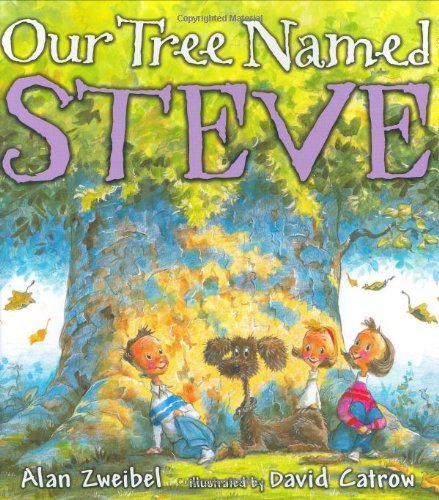 Zweibel's first book for children serves as the chronicle of a family's beloved leafy cornerstone, told in flashback by a father to his children. From the moment they first saw the lot where their house would be built, Adam, Lindsay, Sari and their dog, Kirby, were infatuated with a mammoth tree on the property. Two-year-old Sari pronounced the word "tree" as "Steve," and the name stuck. Saved from clearing, Steve became "a swing holder, target, third base, hiding place," as well as a backdrop for campouts, parties and play dates, and a provider of shade and beauty. But while the kids vacationed at Grandma's, a particularly strong storm toppled Steve, and Dad drafted a letter—this story—to prepare them before their return. TV and stage writer Zweibel fills his epistolary text with heartfelt emotion without overdoing it. His universal and realistic scenarios and characters are sure to strike a chord with a cadre of readers. Catrow's ( , reviewed above) watercolor-and-pencil compositions capture the enormous, comforting Steve in the glory of each season and depict a young, sprightly family appreciative of, and connected to, a natural treasure. His humorous images of a dog dragging underwear off the clothesline or Uncle Chester bursting out of a hammock make the sorrowful images of the bare trunk all the more poignant. Ages 4-up.