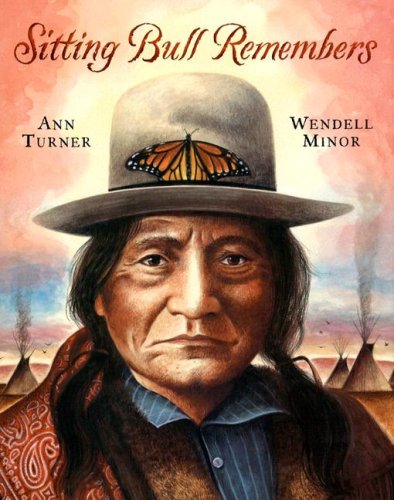 A somber picture of the legendary Sioux chief, Sitting Bull, crouched alone within the confines of a dark room after defeat, opens this lyrical biography: “In this place of fences, strange smells/ …where finally I am caught/ and cannot get free,/ I close my eyes and am home again.” With a turn of the page, readers go from near blackness to a landscape of bright sky and water, where Sioux families gather outside tipis and horses gallop in the background. In realistic detail, Minor (previously paired with Turner for ) paints close-ups (e.g., of a young Sitting Bull battle-ready atop horseback or hunting buffalo), as well as panoramic illustrations (Custer’s troops overrunning a Sioux winter encampment in the Black Hills). Sometimes pictographic symbols (based on Sitting Bull’s own pictographs) float above the main scene to represent the Sioux’s visions. For example, several uniformed soldiers ride upside-down across the top of one spread, denoting a dream Sitting Bull had prior to the Battle of Little Bighorn. In it he sees Cavalry troops riding this way, which he correctly interprets as an omen of the soldiers’ deaths. The poignant final scene shows a meadowlark overlooking the empty plains (“It is all gone,” says Turner’s Sitting Bull, “and only my voice is left”); the significance of the imagery is explained in historical endnotes, as Sitting Bull “claimed to hear words in a meadowlark’s song.” Turner and Minor’s dramatic and insightful work ensure that readers will listen for Sitting Bull’s voice, too. Ages 6-9.