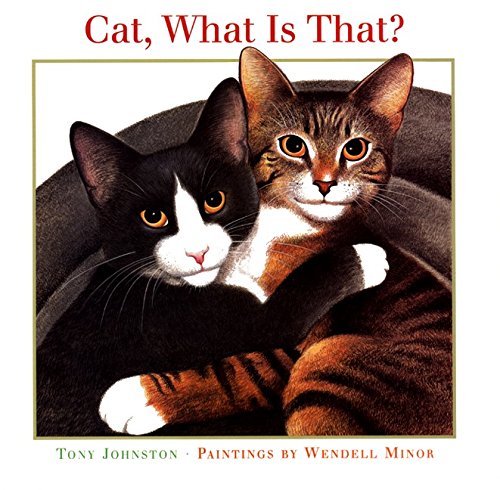 CAT, WHAT IS THAT?

As stylish and sleek as cats themselves, this appealing book should capture the attention of feline fanciers young and old. The title does not refer to a question addressed a cat, but instead poses the question "What a cat?" The poet, who never mentions the word "cat," offers a lyrical list of the animal's behavior and actions. "It is the Spy/ licking its chin/ waiting all day,/ watching the Fin," for instance, is accompanied by a painting of the back of a gray furry head observing a fish bowl. Like a photographic gift calendar, the book offers a new view of cats with each turn of the page, showing different breeds in various poses with four to eight lines of dense text. Younger children, however, may find the resulting combination of words and pictures occasionally baffling. For instance, the line "It is the Wise./ It is the Foof./ Now it is here./ Now it is !" in and of itself is abstract, but the illustration adds to the confusion: a cat on a dock observes the water, as if a fish has just disappeared, thus shifting the pronoun away from the cat to the object the cat observes. Nonetheless, throughout the volume Minor's cats are irresistible and Johnston's compact rhymes often astonishingly apt. Both together capture the essence of the mysterious creature we call cat. All ages.