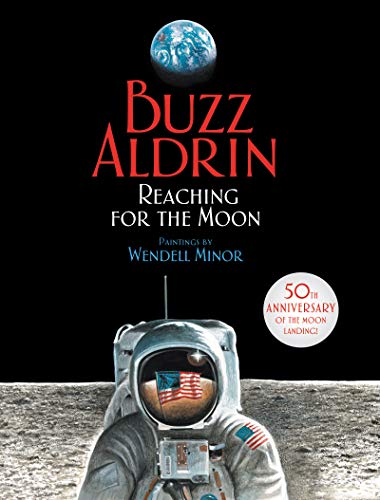 Reaching for the Moon

Aldrin and illustrator Minor (one of six American artists selected to cover the launch of the space shuttle in 1988) bring the astronaut's early life and commendable career into stunningly sharp focus.

Aldrin shapes nearly each page into a kind of brief chapter, instantly pulling readers into his easygoing, articulate narrative. For instance, he recalls how, on summer nights during his childhood, "the Moon hung low in the sky, so close to our house that I thought I could reach out and touch the soft white light. I never imagined that one day I would walk on its surface. But maybe it was meant to be. You see, before she was married, my mother's last name was Moon." In another neat coincidence, Aldrin's pilot father took the two-year-old on his first flight in a plane painted to look like an eagle; and, in a craft named , Aldrin and Neil Armstrong landed on the moon during the 1969 mission.

After recapping earlier events in his life, the author recaptures the thrill of the 's landing and his and Armstrong's exploration of the moon. Aldrin closes with a stirring afterword encouraging readers to reach for their own moons: "If you set your sights high, you may accomplish more than you ever dreamed was possible." Minor's light-infused art balances lifelike, affecting portraiture and images of various spacecraft in motion, rendered with an almost dizzying clarity. Author and artist clearly aimed high here and easily hit their mark. Ages 6-9.