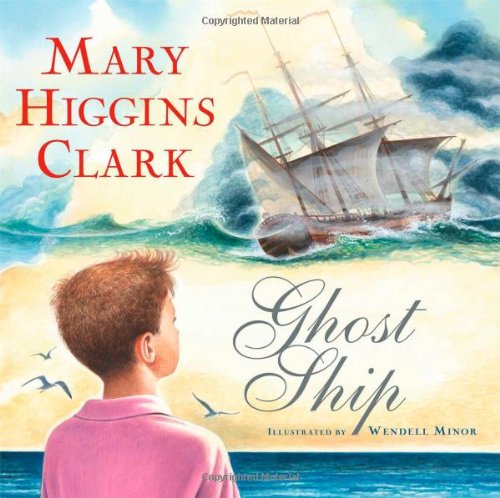 Bestselling adult author Clark's debut children's book meshes two eras, each depicted by Minor ( ) in finely detailed, light-infused paintings. Modern-day nine-year-old Thomas has grown up hearing his grandmother speak of Captain Hallett, who built her seaside Cape Cod home more than 300 years ago. One day, while beachcombing after a storm on the Cape, Thomas finds a belt buckle featuring the image of a ship, which in turn conjures a ghostlike boy dressed in 17th-century clothing. The ghostly boy introduces himself as Silas, a cabin boy on Hallett's ship, then explains that the lighthouse outside Thomas's grandmother's home did not exist in the days when Hallett sailed—and that he and his peers had to do some quick thinking to save the Captain from shipwreckers one night. Clark takes some of the wind out of Silas's sails when the boy pauses during the dramatic tale to explain some terms ("Sober light? I don't know what that means," says Thomas; "Perhaps you would say twilight... or... dusk.... What I mean is the time just before the sun is totally vanished in the sky," Silas replies). When Silas successfully thwarts the efforts of the "mooncussers" (aka shipwreckers), he earns the very belt buckle Thomas retrieved from the sand. Later, Thomas returns to his grandmother's house, where the tale comes neatly full circle: he gazes on a portrait of Hallett, who sports the buckle as the man's ship floats in the background. Ages 6-10.