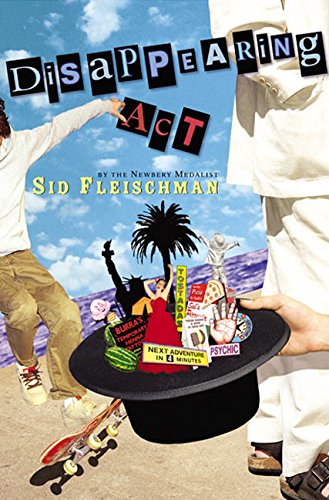 From the opening lines of this sprightly adventure ("Hear that screaming? That's my sister, Holly. It's not exactly screaming. It's singing") readers know they are in good hands. Fleischman again unleashes his literary sleight-of-hand, dispensing laughs, a lickety-split plot, vivid descriptions ("His voice had a kind of English accent, but heavily dipped into Bulgarian or Turkish or something thick and murky like that") and characters such as Bumpy Rhoades, a med-student-turned-watermelon-juggler. Here 12-year-old Kevin Kidd and his aspiring opera singer sister Holly (age "twenty-one plus") are on the lam, fleeing from a stalker they call the Toad. They don't know what he wants, or why he's burglarized them—perhaps it has something to do with their missing, and possibly dead, archaeologist mother? They aren't waiting around to find out. En route from New Mexico to Southern California, they wash up in Venice Beach, where they rent a room from Miss Fiesta Foote, a plump movie extra, rename themselves Pepe and Chickadee Gomez, and scare up jobs on the boardwalk (Kevin tells fortunes; Holly sings arias). The Toad eventually shows up, of course, sparking a cat-and-mouse chase that hurtles toward a showdown on the night of Holly's professional debut. Meanwhile, readers unravel a puzzle involving Coronado's golden armor, a fabled lost city in Mexico and a missing map. If the shenanigans sound as frothy as a double cappuccino, the audience likely won't care, for with Fleischman on hand as barista, the recipe for effervescent fun is practically guaranteed. Ages 8-up.