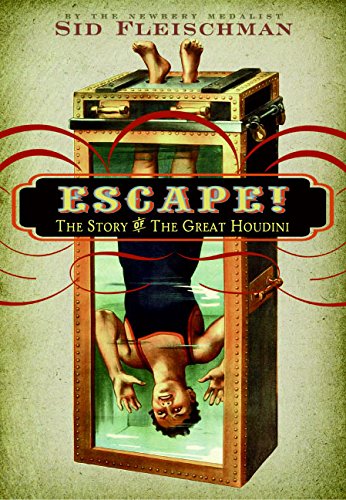 Fleischman's ( ) colorful, anecdotal biography of Harry Houdini (1874–1926) offers an accessible portrait of this master of magic and escape. The author sets an affectionate and humorous tone, beginning with his subject's most famous feats, and then declaring, "As a devout magician, I am able to reveal only that I may reveal Houdini's secrets." Fleischman neatly sorts out facts, speculation and legend as he traces the performer's career, from his early stints in vaudeville, with a circus and traveling medicine show and even, along with his wife and on-stage sidekick, Bess, "a part-time career as ghost wranglers and mind-reading fakers." A savvy self-promoter, Houdini made headlines through such successful challenges as breaking out of a Chicago jail cell, yet, Fleischman wryly notes, his "sudden fame was written in vanishing ink." After securing a solid reputation in Europe, the "monarch of manacles" became a stage sensation and financial success in this country as well, with some of his more famous feats, such as escaping from a straitjacket while suspended upside-down from a building. A "teenage conjuror" and former vaudevillian himself, Fleischman brings an insider's sensibility to Houdini's story (after Houdini's death, he came to know Bess, who "became a sort of den mother to us young enthusiasts"). One gets the sense that the author delved into his subject for his own enjoyment, and brings readers along for an entertaining ride. Copious photographs help flesh out Houdini's robust, larger-than-life personality and underscore the range and audacity of his exploits. Ages 9-up.