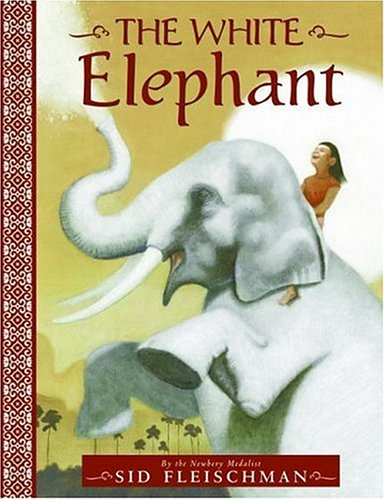 Fleischman ( ) offers a cleverly themed if sleepy story starring Run-Run, a boy in old Siam. His beloved old elephant, Walking Mountain, diligently works in the fields removing stumps to earn the lad enough money to feed him. One day, after the elephant sprays an ill-tempered prince with water, the royal punishes Run-Run with a "gift to curse" him: Sahib, an elephant whose white color renders him sacred. The prince's mahout orders Run-Run to treat the animal "like an honored guest," and to feed him the finest foods, even though the noble beast is not permitted to work to earn his keep. Following the palace mahout's directives to let Sahib do as he please, the boy unlocks the animal's leg chain in hopes he will run away. Instead, Sahib imitates Walking Mountain and goes to work removing stumps. Run-Run's fears of the sacred elephant being discovered abate when the creature wallows in red mud, disguising his true color. The story's action is scarce, save for scenes in which White Mountain rescues Sahib from an attacking tiger; and, again mimicking the old elephant's actions, Sahib prevents another tiger from killing the prince. Half-tone illustrations open each chapter with a key scene. Though the novel offers a rewarding portrayal of friendship and loyalty, and a satisfying denouement, some Fleischman fans may find it slow-moving compared with his other works. Ages 8-11.