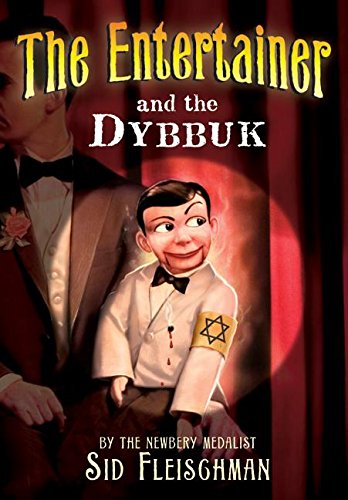 The Entertainer and the Dybbuk

Traveling into territory more commonly associated with Isaac Bashevis Singer, Newbery Medalist Fleischman ( ) draws attention to the especially cruel treatment of Jewish children during the Holocaust. The “Great Freddie” is a decorated GI, an orphan who has stayed in Europe and, by 1948, has found a toehold as a ventriloquist. And then Avrom Amos Poliakov shows up—rather, takes over. Avrom Amos is a dybbuk, a wandering soul or ghost, and, by demonstrating how he might speak for Freddie's wooden dummy, Avrom Amos convinces Freddie to let him lodge within Freddie. The dybbuk makes good on his promise, and Freddie's act becomes the toast of Paris. But Avrom Amos has his own agenda, as Freddie knows. He wants to track down the infamous SS colonel who not only killed him but also tortured children, including his sister, and before long, the dybbuk co-opts Freddie's act and his interviews to spread the word about the SS colonel. The dybbuk's voice will shock some readers; he speaks in embittered, Yiddish-inflected English that drives home his point. Here is Avrom Amos giving Freddie a history lesson: “You didn't hear [that Hitler] told his Nazi those lunatics, 'Soldiers of Germany, have some fun and go murder a million and a half Jewish kids? All ages! Babies, fine. Girls with ribbons in their hair, why not?' ” Fleischman inserts horrific factual details of Nazi brutality, and yet his message about bearing witness may be submerged beneath the sensational story line. Ages 9-14.