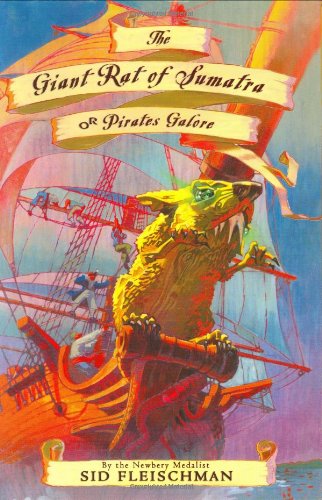 THE GIANT RAT OF SUMATRA: Or Pirates Galore

Twelve-year-old Shipwreck narrates Fleischman's third novel (after and ) based on mid-19th-century California history. The boy earned his nickname after being fished from the sea by Captain Gallows, a Mexican sea bandit at the helm of . The young Bostonian was one of two survivors from a whaling boat that splintered in a storm. Readers looking for a high-seas adventure may be somewhat let down by the fact that, despite the novel's title and cover art, Gallows's ship anchors after it enters San Diego Bay on the first pages; most of the subsequent action takes place on land. Yet plenty of intrigue, acts of revenge and droll dialogue will keep kids bountifully entertained. Gallows takes Shipwreck under his wing and sews into the hem of the lad's coat his most precious booty: the giant emeralds that once served as the eyes of his ship's bowsprit—a giant rat carved from mahogany. Shipwreck dutifully guards the gems as he sticks close to Gallows, who purchases a vast rancho, attempts to sabotage the business of the rancher who mistreated him in his youth and cagily deals with banditos who apprehend him. Adding dimension to the story, which entails some slapstick scenarios, is its historical backdrop—the Mexican-American War; during the course of the tale Mexico loses California to the United States. A boisterous, cleverly crafted caper. Ages 10-up.