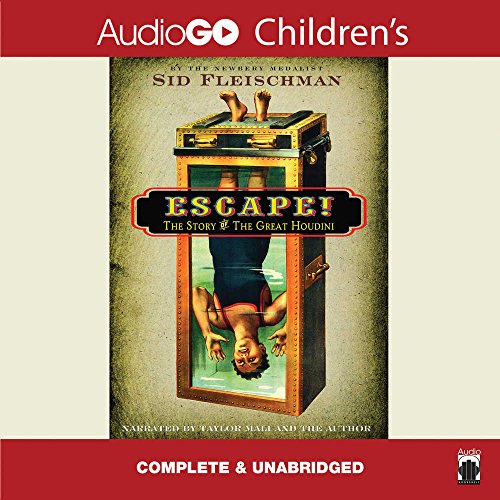 In this breezy biography, Newbery Medalist Fleischman, himself a former magician, pays homage to Harry Houdini—the man and the myth. Audio actor Mali, an expert at suspense and tension, is the right man for the narration. Through blood, sweat and tears—and the love of a good woman—poor Jewish immigrant Ehrich Weiss transforms himself into Harry Houdini, one of magic's greatest showmen. Mali unfurls the historical material with ease, matching the author's relaxed prose style. He savors the period details and vaudevillian language: “razz-matazz,” “bamboozled,” “flim-flammery.” Mali renders the array of increasingly dangerous stunts—the Metamorphosis, the Indian Needle Trick and the Chinese Water Torture Cell—with such a sense of showmanship that listeners may feel themselves part of the audience. Fleischman doesn't reveal any of the escape king's secrets but does debunk some of the better-known myths. Mali's fresh and versatile voice also captures Houdini's indignation at his pesky imitators and disdain for fraud spiritualists. His outsize ego and thin skin are brought to life, too. The photographs included in the print version (from Fleischman's personal collection via Bess Houdini, the magician's widow and Fleischman's one-time mentor) would have been a welcome supplement. A now aged and raspy-voiced Fleischman reads the preface and last chapter, bookending an engaging narrative. Ages 9-up.