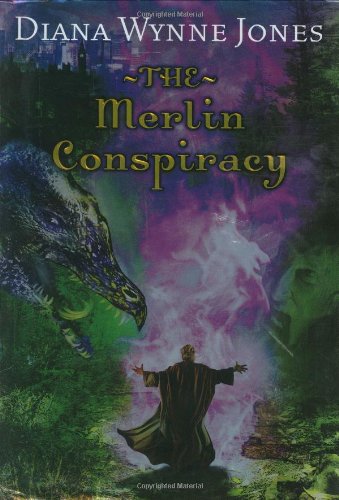 Whimsy, invention and the chilling sense of a world (multiple worlds, actually) gone topsy-turvy characterize this grandly outsize fantasy from Jones (). In an alternate England, where the king maintains the magic of the realm by constantly traveling the land, teenage Roddy and her best friend-cum-protégé, the younger boy Grundo, have spent their lives as part of the peripatetic Court. When Roddy and Grundo stumble on a fiendish plot to take control of all their world's magic, they realize that they must put a stop to it—even though one of the would-be usurpers is Grundo's own mother. Meanwhile, here on our own version of Earth, Nick (aka Nichothodes Koryfoides, whom Jones's fans may already know from her adult fantasy ) is tipped into yet another alternate world and begins a journey that eventually lands him right in the middle of Roddy and Grundo's struggle. Cities personified (imagine Old Sarum as a walking, talking and somewhat grumpy old man), hordes of smuggled salamanders and a pair of astonishingly bratty twin sisters (in response to their rude behavior, their mother gushes, "Aren't they a caution?") are just a few of the delights to be found here. Ensorcelled by this exuberant tale and Jones's unmistakable wit, readers may find themselves echoing Nick's off-the-cuff literary critique: "By the time I'd read two pages, I was so longing to get to this other world that it was like sheets of flame flaring through me." Ages 10-up.