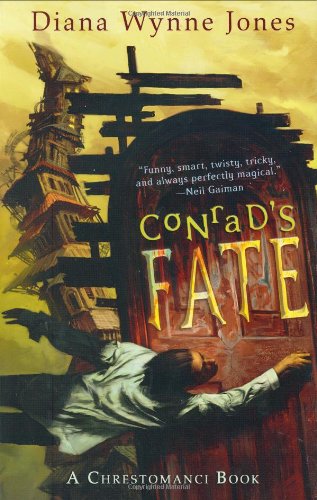 Wynne Jones's latest addition to her Chrestomanci books brings a servant's eye–view (a là ) to her characteristic blend of magic, mystery and snortingly funny slapstick. Instead of going on to secondary school like most of his friends, 12-year-old Conrad is sent by his uncle to Stallery, a castle high in the English Alps, to work as an apprentice servant. Conrad has a secret mission: According to his uncle, he has a terrible karma that can only be cleared by seeking out and killing a mysterious someone who lives at the castle. On his way there, Conrad strikes up a friendship with a self-assured, slightly older boy, whom the author's fans will recognize as Christopher Chant, enchanter and future Chrestomanci. Christopher has a secret mission, too: He must locate his friend Millie, who has run away from her Swiss boarding school and hidden herself in Conrad's world. When Conrad and Christopher are not busy blacking boots, ironing linens and learning to be as discreet and unobtrusive as "Living. Pieces. Of furniture," the boys search for Millie and discover that Stallery stands on a "probability fault," with the power to whisk visitors to alternate worlds. Adding to the magical mayhem are at least two pairs of star-crossed lovers, a troupe of unemployed actors, and a couple of hair-raising visits from a messenger of the Lords of Karma. Long-time Chrestomanci fans will take particular pleasure in learning how the enchanter acquired some of his more notable traits. Ages 10-up.