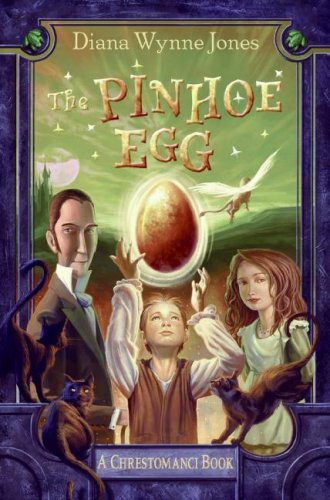 Wynne Jones is at the top of her form in this excellent addition to the Chrestomanci books, set not long after the events chronicled in . Marianne's summer gets off to an unpromising start, thanks to her grandmother, the willful and manipulative Gammer Pinhoe, head of all Pinhoe family witchcraft in Ulverscote and the other villages surrounding Chrestomanci Castle. Marianne becomes errand-runner for her entire extended family when Gammer lurches into a punning, malicious (and wickedly funny) form of dementia, the seeming result of a run-in with another local witching family. Meanwhile, up at Chrestomanci Castle, Cat Chant (last seen in ) has inadvertently become the owner of a horse named Syracuse, whose powers include helping Cat recognize the presence of dwimmer, a mysterious, nature-oriented magic. On a trip to Ulverscote, Cat meets Marianne, recognizes her as a kindred spirit and becomes the caretaker of a mysterious egg they find in the attic of Gammer's house. Wild magic ensues as the egg hatches, long pent-up nature spirits are released, ugly secrets are revealed, and Marianne and Cat confront terrifying challenges. Longtime fans will be pleased to encounter Cat once again, and to watch the early stages of his friendship with Marianne unfold. Newcomers will relish the lavish storytelling, and doubtless be driven back to earlier books. Witty, wise and wonderfully imaginative—this novel ranks among the author's best. Ages 10-14.