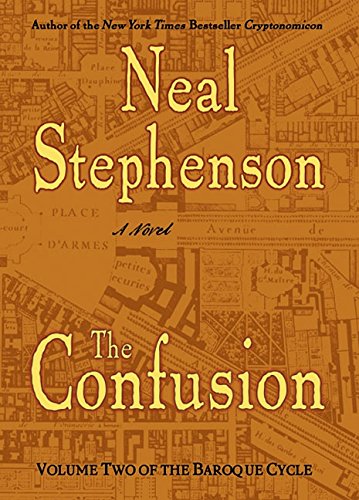 THE CONFUSION: Volume Two of the Baroque Cycle

The title of Stephenson's vast, splendid and absorbing sequel to (2003) suggests the state of mind that even devoted fans may face on occasion as they follow the glorious and exceedingly complex parallel stories of Jack Shaftoe, amiable criminal mastermind, and Eliza, Countess de la Zeur, courageous secret agent and former prisoner in a Turkish harem. In 1689, Jack recovers his memory in Algiers, evades galley slavery and joins a quest for the lost treasure of a Spanish pirate named Carlos Olancho Macho y Macho. This leads to adventures at sea worthy of Patrick O'Brian, and hairbreadth escapes from the jaws of the Inquisition. Meanwhile, Eliza is captured by the historical (and distinguished) French privateer Jean Bart while trying to escape to England with her baby. She must then navigate the intrigues of the court of Louis XIV, which are less lethal than those of the Inquisition by a small margin, but still make for uneasy sleep for a friendless female spy. Her correspondence with such scientific minds as Wilhelm Leibniz helps propel the saga's chronicling of the roots of modern science at a respectable clip. Of course, one can't call anything about the Baroque Cycle "brisk," but the richness of detail and language lending verisimilitude to the setting and depth to the characters should be reward enough for most readers. .

, The System of the World,