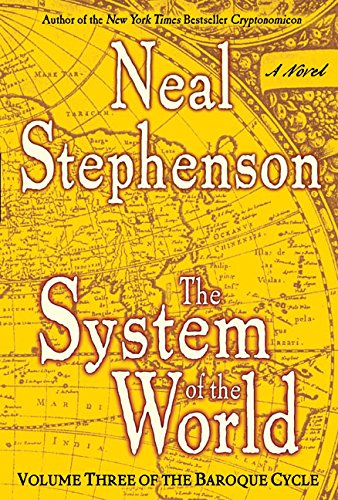 THE SYSTEM OF THE WORLD: Volume Three of the Baroque Cycle

The colossal and impressive third volume (after and ) of Stephenson's magisterial exploration of the origins of the modern world in the scientific revolution of the baroque era begins in 1714. Daniel Waterhouse has returned to England, hoping to mediate the feud between Sir Isaac Newton and Leibniz, both of whom claim to have discovered the calculus and neither of whom is showing much scientific rationality in the dispute. This brawl takes place against the background of the imminent death of Queen Anne, which threatens a succession crisis as Jacobite (Stuart, Catholic) sympathizers confront supporters of the Hanoverian succession. Aside from the potential effect of the outcome on the intellectual climate of England, these political maneuverings are notable for the role played by trilogy heroine Eliza de la Zour, who is now wielding her influence over Caroline of Ansbach, consort of the Hanoverian heir. Eliza has risen from the streets to the nobility without losing any of her creativity or her talents as a schemer; nor has outlaw Jack Shaftoe lost any of his wiliness. What he may have lost is discretion, since he oversteps the boundaries of both law and good sense far enough to narrowly escape the hangman. In the end, reluctant hero Waterhouse prevails against the machinations of everybody else, and scientific (if not sweet) reason wins by a nose. The symbol of that victory is the inventor Thomas Newcomen standing (rather like a cock crowing) atop the boiler of one of his first steam engines. This final volume in the cycle is another magnificent portrayal of an era, well worth the long slog it requires of Stephenson's many devoted readers.