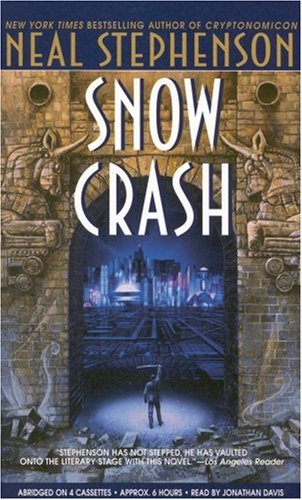 One of the added pleasures of the success of Stephenson's recent books (, etc.) is this better-late-than-never audio version of his third (and arguably best) novel, which continues to be a paperback bestseller. (1992), which helped earn the word "cyberpunk" a place in history, is set in the not-too-distant future where the Mafia controls pizza delivery, the U.S. is a vast, mall-like patchwork of corporate-franchise city-states, and young Hiro Protagonist (yes, that's the hero protagonist's name) uses his computer game wizardry and pizza delivering skills to combat a deadly new designer drug (and computer virus) called Snow Crash. Actor/writer Davis is the ideal choice for bringing Stephenson's crackling, poetic language to life, and the author-approved abridgement sacrifices none of his hilariously skewed, eminently believable vision—a stew of concepts from Sumerian myth to Japanese anime—of the commercially sponsored fate that sits waiting in a giant shopping mall, coming soon to a neighborhood near you.