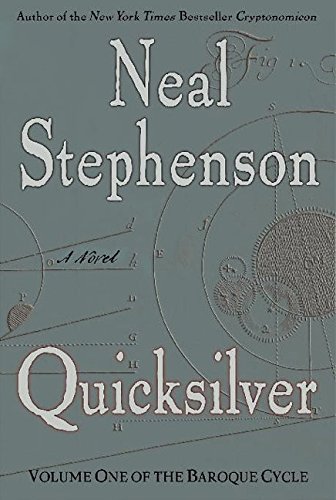 QUICKSILVER: Volume One of the Baroque Cycle

Stephenson's very long historical novel, the first volume of a projected trilogy, finds Enoch Root, the Wandering Jew/alchemist from 1999's , arriving in 1713 Boston to collect Daniel Waterhouse and take him back to Europe. Waterhouse, an experimenter in early computational systems and an old pal of Isaac Newton, is needed to mediate the fight for precedence between Newton and scientist and philosopher Gottfried Wilhelm Leibniz, both of whom independently invented the calculus. Their escalating feud threatens to revert science to pre-empirical times. Root believes Waterhouse, as a close friend to both mathematicians, has the ability to calm the neurotic Newton's nerves and make peace with Leibniz. As Waterhouse sails back to Europe (and eludes capture by the pirate Blackbeard), he reminisces about Newton and the birth of England's scientific revolution during the 1600s. While the Waterhouse story line lets readers see luminaries like Robert Hooke and Isaac Newton at work, a concurrent plot line follows vagabond Jack Shaftoe (an ancestor of a character, as is Waterhouse), on his journey across 17th-century continental Europe. Jack meets Eliza, a young English woman who has escaped from a Turkish harem, where she spent her teenage years. The resourceful Eliza eventually rises and achieves revenge against the slave merchant who sold her to the Turks. Stephenson, once best known for his techno-geek SF novel , skillfully reimagines empiricists Newton, Hooke and Leibniz, and creatively retells the birth of the scientific revolution. He has a strong feel for history and a knack for bringing settings to life. Expect high interest in this title, as much for its size and ambition, which make it a publishing event, as for its sales potential—which is high.

The Confusion The System of the World