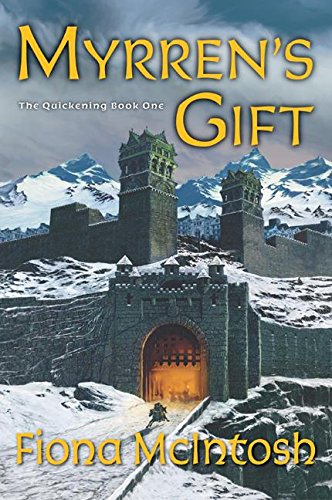 MYRREN'S GIFT: The Quickening Book One

Fantasy fans will welcome Australian author McIntosh's gripping first installment in her Quickening trilogy, a tale of the eternal struggle between good and evil filled with magic, blood and jealousy. When 14-year-old Wyl Thirsk inherits the generalship of the Morgravian legions on his father's early death, he's fortunate to possess both the good habits and wise judgment that have helped the Thirsk family remain commanders of the legions for generations. These virtues will serve him well in his dealings with King Magnus of Morgravia's wayward son, Prince Celimus, whom Wyl is duty-bound to protect. After both boys achieve adulthood, the cruel Celimus orders Wyl to witness the torture and execution of a young woman, Myrren, accused of being a witch because she has mismatched eyes. Before her death, Myrren passes on to the empathetic Wyl a most unusual gift. Some readers may feel frustrated by the lack of information about Myrren or the purpose of her gift, though no doubt future volumes will fill in the gaps in an otherwise delightful and fast-moving story.