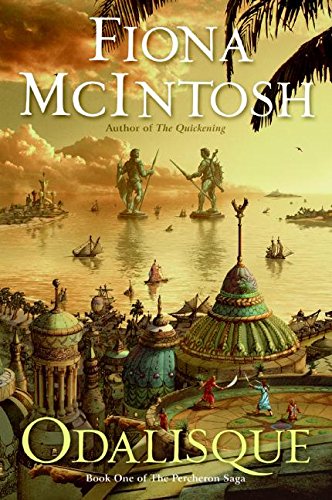 Odalisque: Book One of the Percheron \t\t Saga

A magnificent setting distinguishes this first of a new fantasy \t\t trilogy from McIntosh (), who \t\t imbues the city-state of Percheron with many attributes of Constantinople under \t\t the Ottoman Turks. Joreb, the zar (or ruler) of Percheron, is well served by \t\t his military leader, the handsome Lazar, who fought his way to freedom from \t\t slavery. When Joreb dies an untimely death, Boazâ€”Joreb's 15-year-old son by \t\t his beautiful, intelligent and ambitious first wifeâ€”becomes zar. But not even \t\t Lazar or Pez, a dwarf jester whom nearly everyone thinks is mad, can shield \t\t young Boaz from the cruel necessities of ruling Percheron. (McIntosh, who \t\t doesn't stint on depicting the brutality of slaughter, includes a disturbing \t\t castration scene.) Meanwhile, gods and goddesses feud, a new odalisque joins \t\t the harem, and a neighboring kingdom threatens invasion. While the author \t\t leaves the culture's religious aspects undeveloped, strong characters and an \t\t enticing plot bode well for future installments.