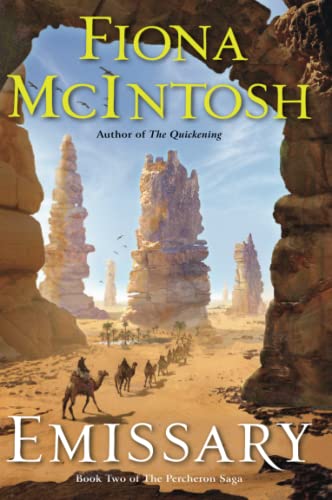 Though the world-building remains top-notch, this slow-moving second installment of McIntosh’s epic fantasy (after ) appears mainly designed to set up more interesting action in later volumes. Ana, a virginal odalisque, is trapped in the idle harem of Boaz, the chaste, adolescent Zar of Percheron. Nearly every man who sees Ana desires and adores her, not only the Zar but also exiled warrior Lazar and the goddess-touched, shape-shifting dwarf, Pez. However, Herezah, the Zar’s mother, sees Ana as a dangerous threat to her supremacy in the harem, and she concocts a plan with chief eunuch Salmeo to bring about Ana’s humiliation and demise. A new setting eventually blows a fresh desert breeze through the stifling atmosphere, but the hundreds of pages spent building up to Ana’s escape attempt, including a disturbing scene of sexual torture at Salmeo’s hands, will have the reader sharing Ana’s longing to be anywhere other than the Zar’s palace.