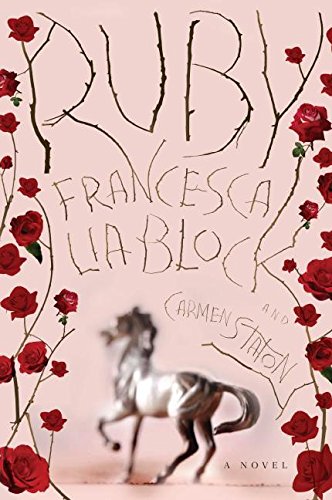 YA author Block (the Weetzie Bat books) collaborates on a novel yet maintains her trademarks: fairy tale simplicity combined with wrenching emotional realism, served with a hefty side of over-the-top romance. It's told mostly from the perspective of premonition-prone Ruby, who, along with her sister, Opal, grows up terrorized by a chillingly abusive father while their loving but eerily passive mother looks on. Interspersed throughout are vignettes from the life of a British boy named Orion Woolf, who grows up with a kind but deceitful sorceress mother, Isabelle, and blooms into dangerous beauty. Ruby, seeking solace from a bad relationship, moves to Los Angeles and works as a nanny for a movie producer whose film stars Orion, who has become an Orlando Bloomesque star. Instantly smitten, Ruby buys a plane ticket to England, where she traipses through a psychedelic London, lands in Orion's ultra-bucolic hometown, finds a job in Isabelle's magic shop and hones her innate powers. When a badly ailing Orion comes home to hide from the world, Ruby uses her gifts to nurse him back to health—though, as her intensifying flashbacks to the horrors of her childhood gradually reveal, she may be even more in need of healing.