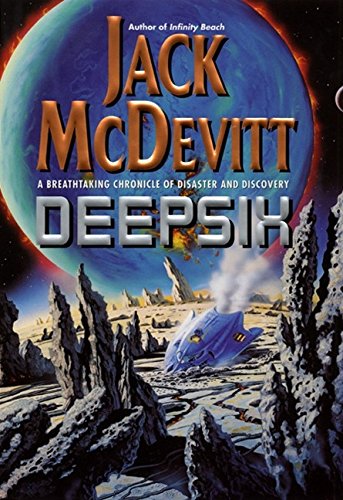 Those who like their science hard and their alien adventures bloody will enjoy this latest from Philip K. Dick Award runner-up McDevitt (). In the 23rd century Deepsix is a planet in deep trouble. In about three weeks a Jovian-sized world will collide with it. Although Deepsix is a treasure trove of life, it has been left unexplored for the last 20 years because hostile animals slaughtered most of the first human landing party. Now, with the discovery of traces of an advanced civilization on the planet, a new expedition hastily sets out to rescue bits and pieces of the culture before they are lost forever. To find the lander that was abandoned two decades earlier, the disgraced commander of the original expedition must make a deadly trek across Deepsix with (among others) two feisty women and a misogynistic celebrity writer who once pilloried the team leader in the press. Goaded by their off-planet superiors, they also have to solve the mystery inherent in the disappearance of Deepsix's civilization. McDevitt puts his characters into predictable jeopardies while methodically solving the conundrum of the missing aliens. Though the rigorous scientific explanations of the techniques used in the rescue are absorbing, the huge, mostly two-dimensional cast slows down the action. Sadly, McDevitt's world building is frequently sketchy and his otherworldly animals too terrestrial, although the sexual Venus's-flytrap segment does have its creative and amusing moments.