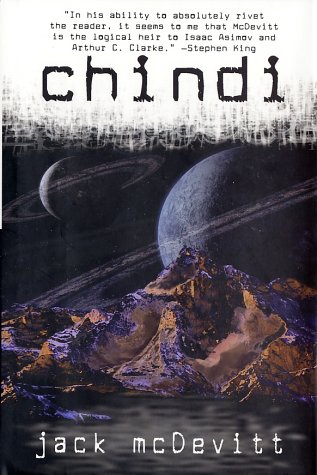 In this sequel to last year's well-received , McDevitt tells a curiously old-fashioned tale of interstellar adventure. Reminiscent of Arthur C. Clarke's , the story sends veteran space pilot Priscilla "Hutch" Hutchins and a crew of rich, amateur SETI enthusiasts off on a star-hopping jaunt in search of the mysterious aliens who have placed a series of "stealthed" satellites around an unknown number of planets. After visiting several worlds, and losing two of her dilettantes to a murderous group of alien angels, Hutch follows the interstellar trail to a bizarre, obviously artificial planetary system. There, two spectacular gas giants orbit each other closely, partially sharing the same atmosphere, while a large moon circles them in a theoretically impossible circumpolar orbit. The explorers soon discover a number of puzzling alien artifacts, including a gigantic spaceship that fails to respond to their signals. First contact is McDevitt's favorite theme, and he's also good at creating large and rather spectacular astronomical phenomena. Where this novel falls short, however, is in the creation of characters. Hutch, beautiful and supremely competent, is an adequate hero, but virtually everyone else is a cartoon. The book abounds in foolhardy dilettantes, glory-hogging bureaucrats and capable space pilots. Oddly, in a novel set some 200 years in the future, McDevitt's cast is almost exclusively white and Anglo-Saxon. This is a serviceable enough space opera, but it operates far from the genre's cutting edge.