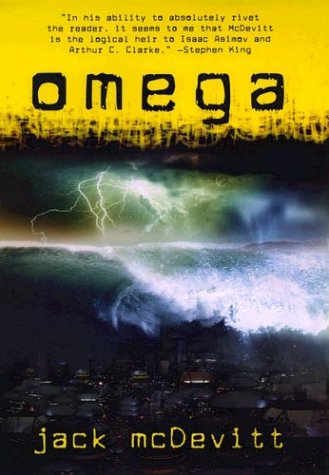 Having mastered the big, sprawling adventure stories called space opera in books like , McDevitt extends the form in this feel-good SF novel that earns its hopeful conclusion. Priscilla "Hutch" Hutchens, heroine of several of McDevitt's previous novels, has had a full career as a space pilot and is now administrator of the government agency in charge of space research. Like most people, she's only mildly concerned with the long-range threat of the omega clouds, masses of energy floating through the universe that detect and pulverize artificial structures (and the intelligent creatures that live in them). After all, the cloud headed for Earth is 900 years away. This situation changes when a charmingly innocent young alien race is discovered just a few months before a cloud will obliterate it. Hutch has to juggle resources to save the cute creatures, at the same concealing the human intervention in order not to disrupt the alien civilization's development. The cloud's implacable threat keeps the action tightly focused, though the story shifts viewpoint frequently to show crowds of people committing themselves to different aspects of the mission. Part of the rescue effort involves spaceships and gadgets, but the most serious part depends on human intelligence and passion. McDevitt is very good at imagining strange challenges—and at picturing humans coping when things don't work out as planned. His characters succeed in imposing their compassion on the void.